An intimate encounter with innovation

An idea typically begins as an incorporeal thing, existing only in one’s head. Getting ideas to cross the vast divide between imagination and reality is no easy feat, but the most intrepid of innovators are undeterred—in fact, they almost seem to relish pushing the boundaries of what’s possible.

Many of these possibilities were on display at the SG:D Industry Day, which took place at the Suntec Singapore Convention & Exhibition Centre on 17 October 2019. Organised by the Infocomm Media Development Authority (IMDA), the event was an opportunity for public and private sector stakeholders alike to get up close and personal with technologies that are shaping the way we interact with the digital realm. 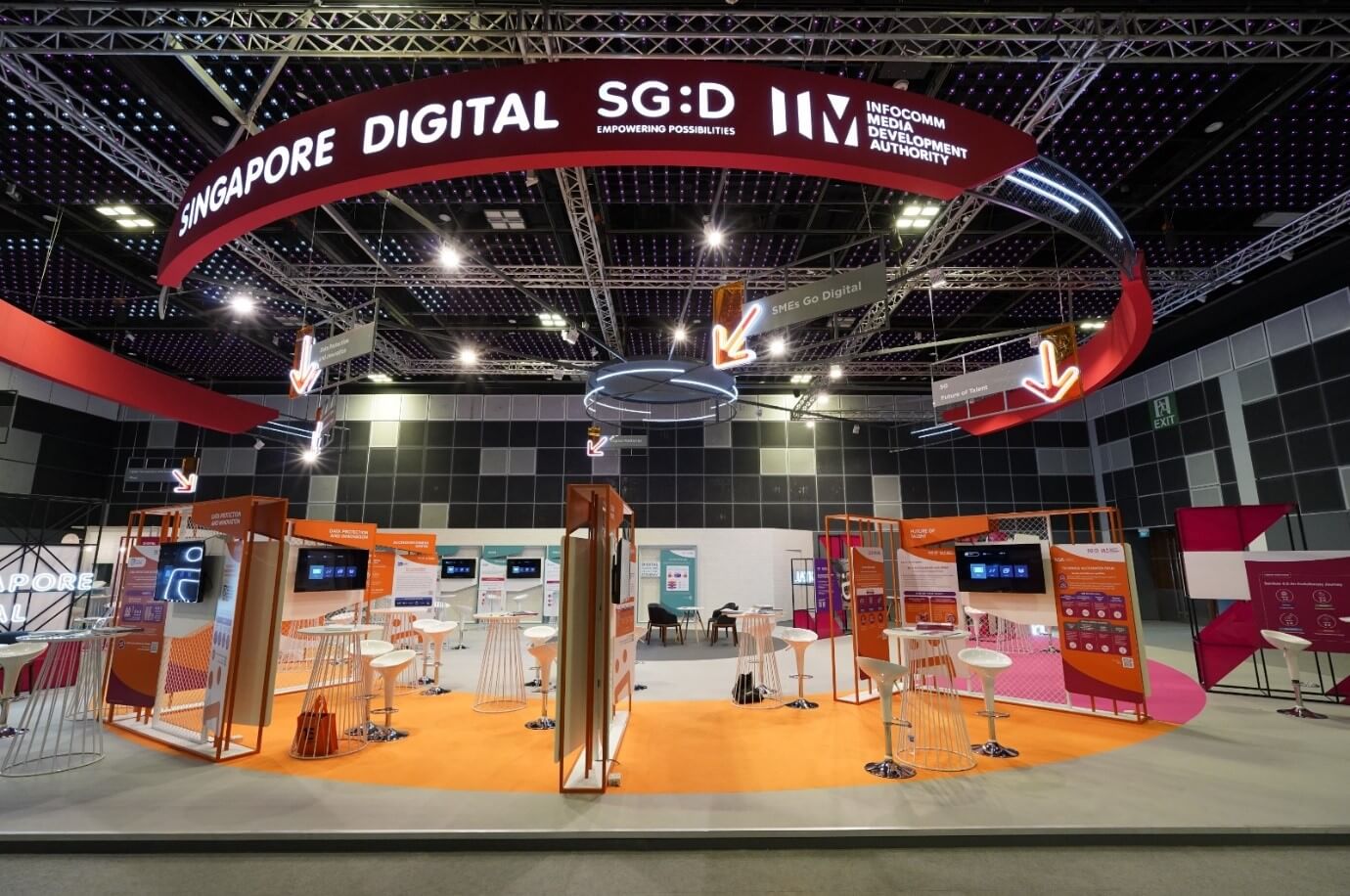 A quick exploration of IMDA’s pavilion revealed some eye-catching developments in the field of augmented, virtual and mixed reality. Meet Mr Sean Whiteley, founder of AxoMem, a company that is creating a comprehensive platform for data analytics, data visualisation and artificial intelligence. 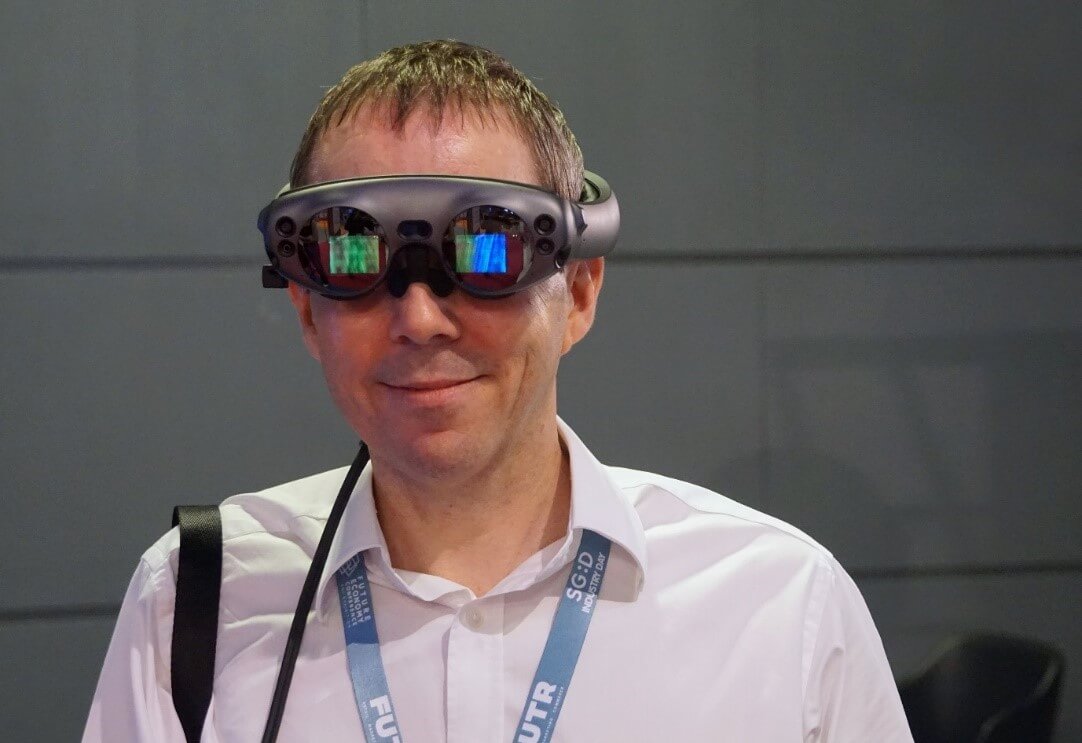 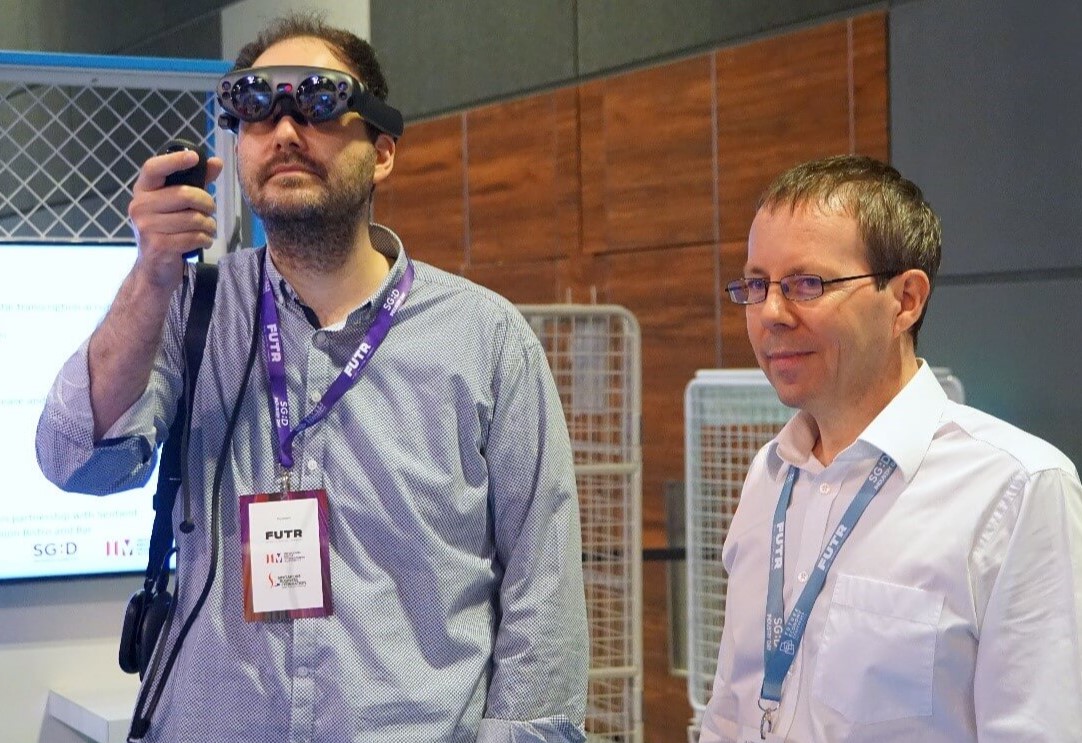 Mr Whiteley wants to change the way people interact with data, especially Big Data. Although most of us are used to analysing and viewing data on a screen, Mr Whiteley demonstrated how the Magic Leap head-mounted display could provide users with an alternative and intuitive experience by exploring entire ‘datascapes’ in 3D, juxtaposed against natural surroundings.

Developing a new interface between humans and data is not without its challenges, so Mr Whiteley is tapping on IMDA’s PIXEL initiative for support. PIXEL is a 25,000-square-feet innovation space that provides the infocomm and media industry with facilities, expertise and programmes to build customer-centric digital experiences for the future.

“For example, when I get closer to a finished product, PIXEL’s User Interface and User Experience Lab can help me think about the design of my product and how people are going to interact with it,” Mr Whiteley said. 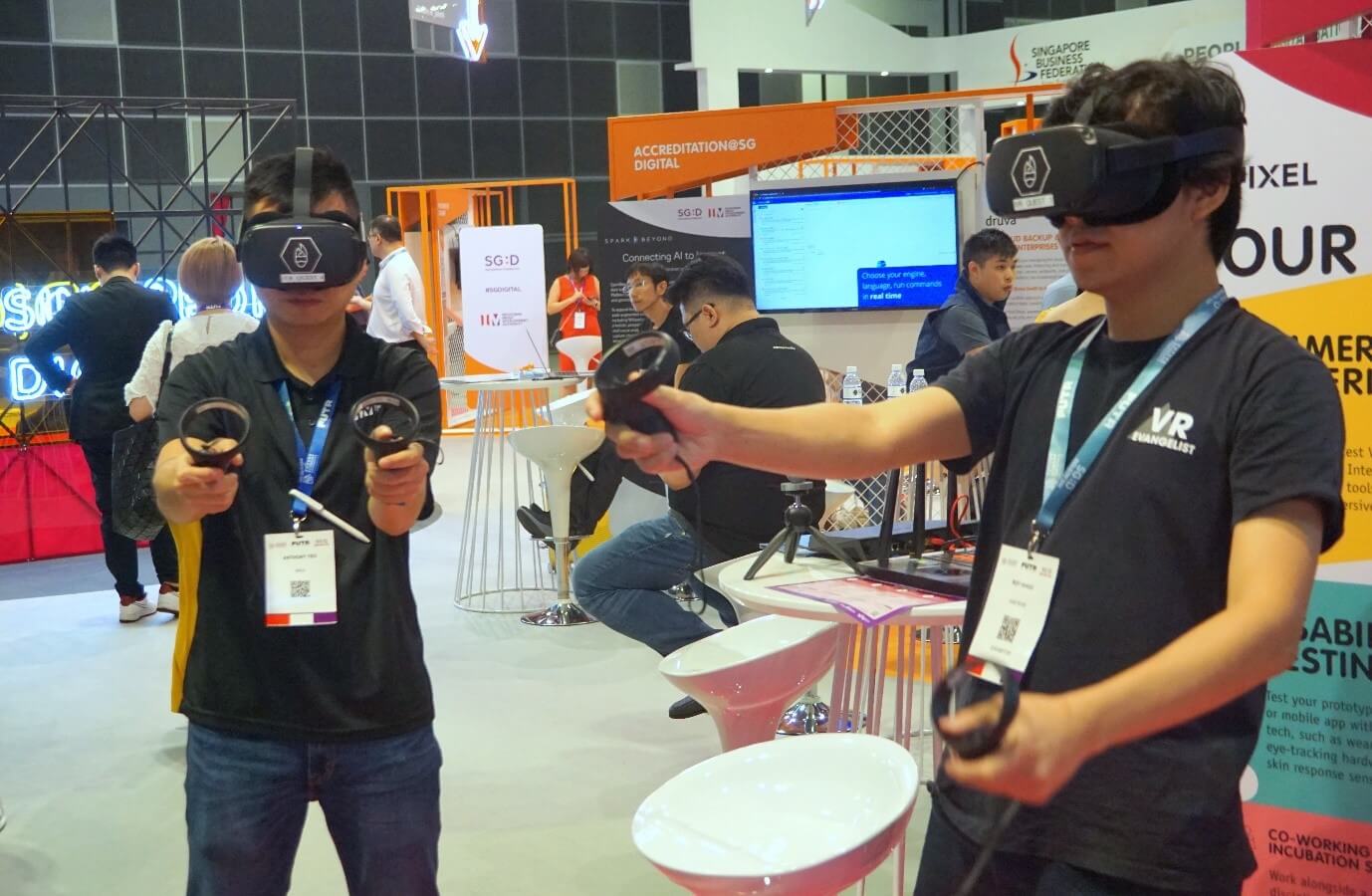 Bots walking the talk (and talking)

Just next to Mr Whiteley’s exhibition booth, two robots moved up and down an aisle, as if on patrol. Without any human intervention, they were able to avoid a chair that had been placed in their paths. These are the autonomous mobile robots, equipped with Light Detection and Ranging (LiDAR) systems and ultrasound sensors to allow unmanned navigation even in complex environments.

“These robots are meant for commercial buildings and could be deployed to, for example, deliver goods from the unloading bay to the storefront,” said Mr Marcus Teo, Assistant Manager, Robotics Engineering, IMDA.

Unlike in warehouses where the environment is well controlled so that robots can be programmed to follow a pre-defined path, these autonomous mobile robots rely on artificial intelligence (AI) to generate their own path from point A to point B, avoiding collisions along the way. The onboard software also allows the autonomous mobile robots to communicate with elevators and automatic doors in the building if necessary, Mr Teo said, adding that such software may be developed by IMDA and shared with robotics vendors. 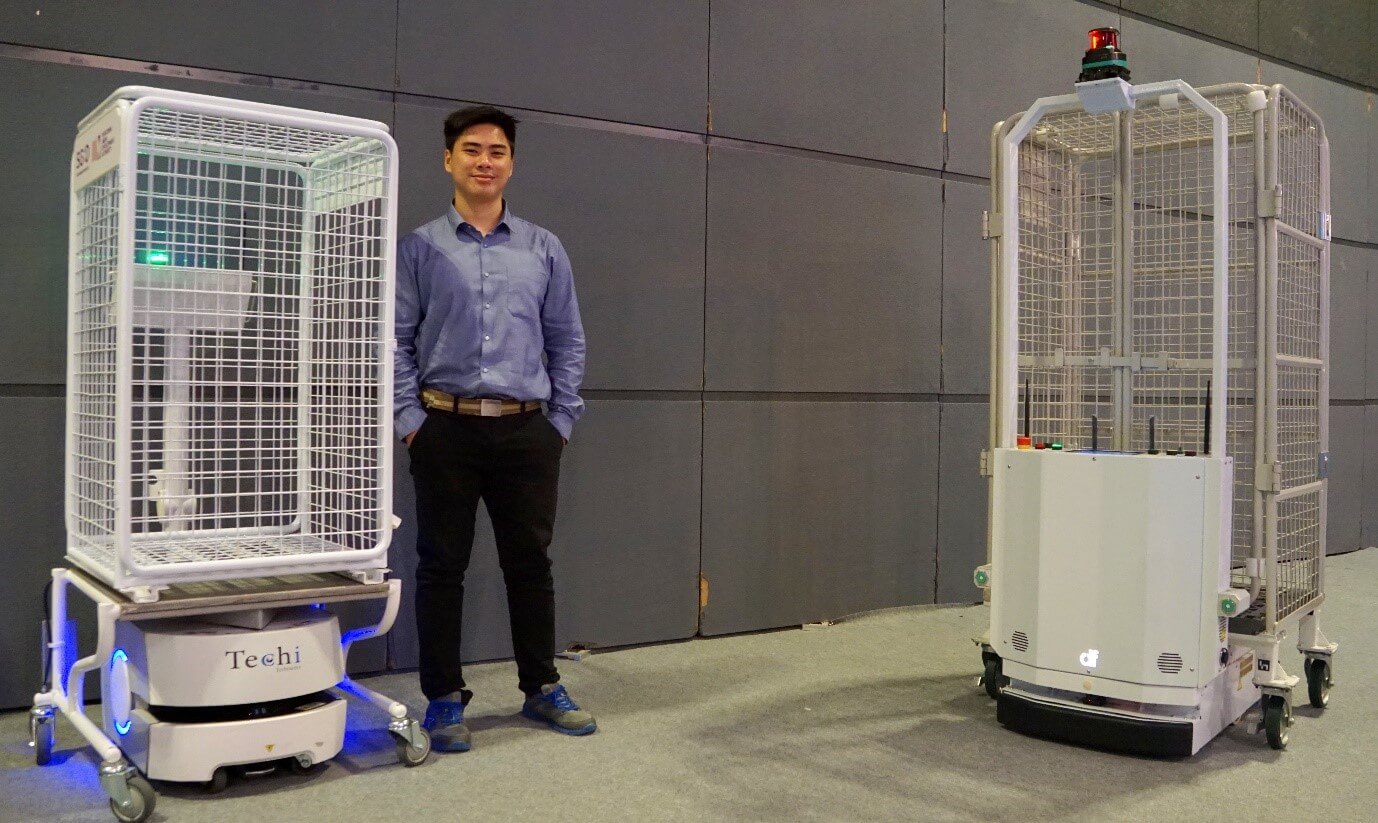 In addition to robots, chatbots that spoke with a local accent were also on display at the exhibition hall, enabled by IMDA’s National Speech Corpus.

“We have 3,000 hours of transcribed Singapore-accented speech, so AI companies can use this to develop their speech models,” said Mr Kevin Khoo, Manager, National Speech Corpus, IMDA. His team was on site to demo a chatbot that integrates two technologies: automatic speech recognition and text-to-speech software. In essence, the chatbot can take spoken orders and read back the order in a Singapore accent, even pronouncing words like nasi lemak [a Malay fragrant rice dish] accurately.

“For now, most chatbots are text-based, but adding this voice element with locally accented English will allow for more natural interactions with people,” Mr Khoo said.

While most of the technologies on display were ‘cool’ in the metaphorical sense of the word, Chiller Doctor takes things more literally. An AI-enabled monitoring system for chillers (e.g. in refrigerators and air conditioners), Chiller Doctor analyses data from Internet of Things sensors and operation crew reports to detect faults early, thereby reducing the risk of chiller failure. 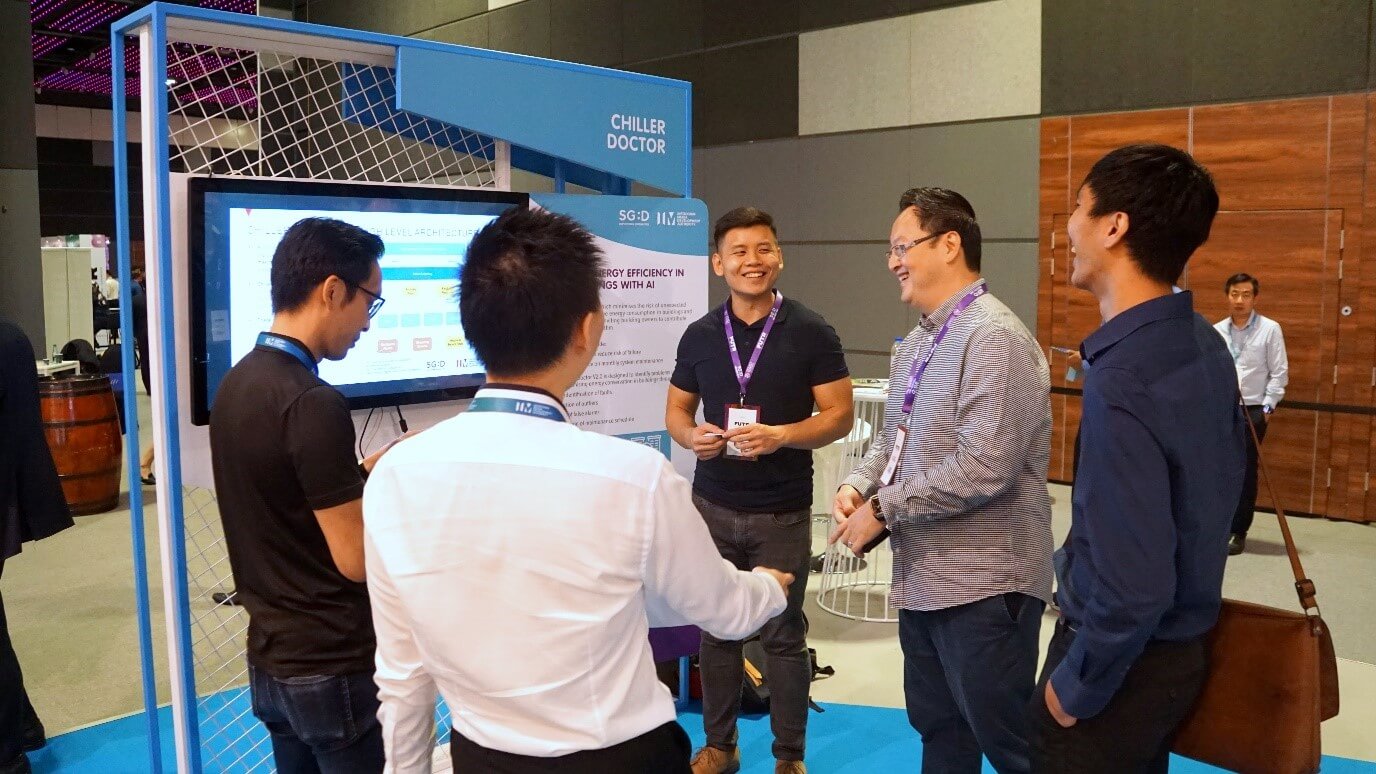 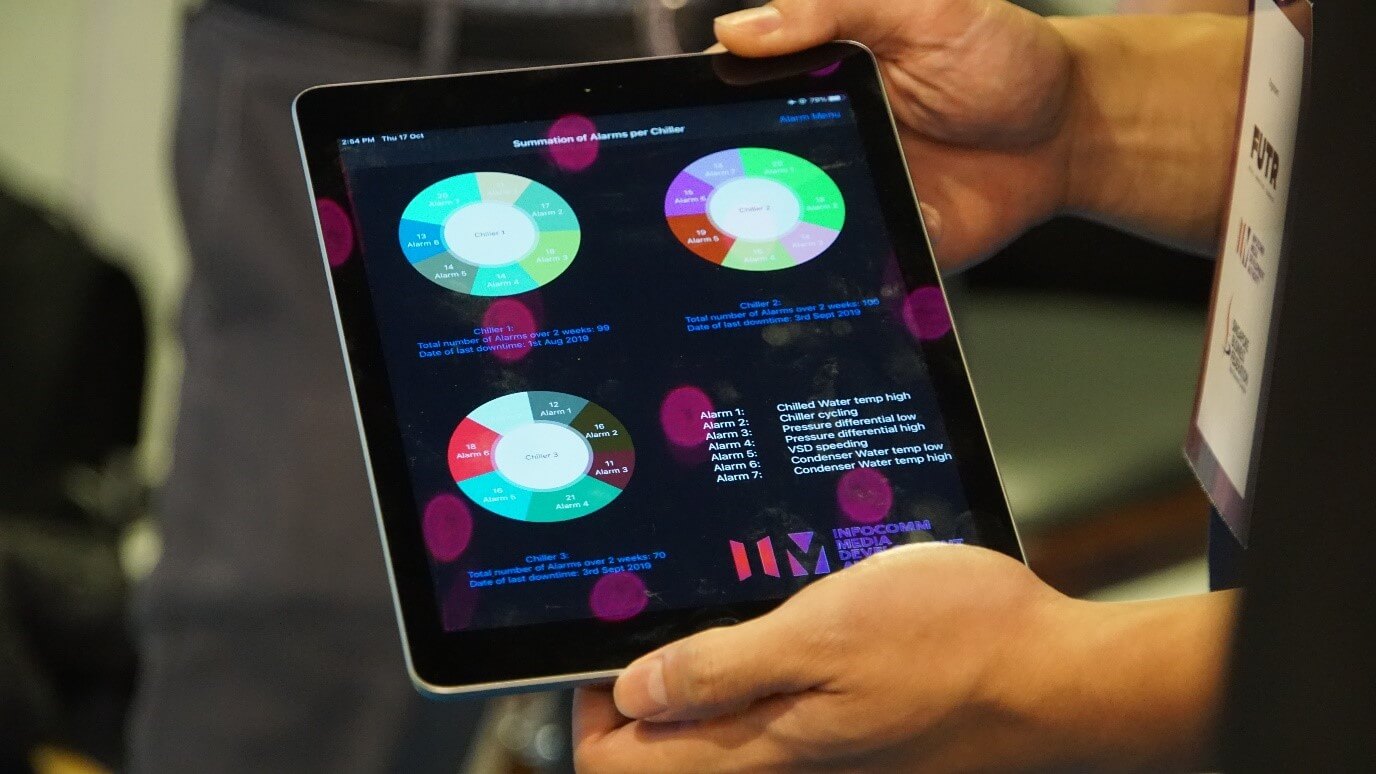 Many of these transformative digital technologies would not have been possible without contributions from both the public and private sector. Hence, IMDA seeks to encourage further collaboration via its Open Innovation Platform.

“This is a crowdsourcing platform where we connect problem owners to problem solvers,” said Mr Pang Zhihao, Manager, Open Innovation Platform, IMDA. He added that since the platform’s inception in 2018, it has already launched five innovation calls and 67 challenges with a total prize money pool of close to S$2 million.

So do you have a brilliant idea just waiting to be realised? Perhaps it’s time to make your move.

After achieving success online, G20 Banana is going beyond the family’s brick-and-mortar business and tapping on digital solutions to bring their local treats to Singaporeans living abroad.

The city-state’s world-class startup ecosystem is dynamic, liquid and competitive — and witnessing a flurry of value-generating tech acquisitions.